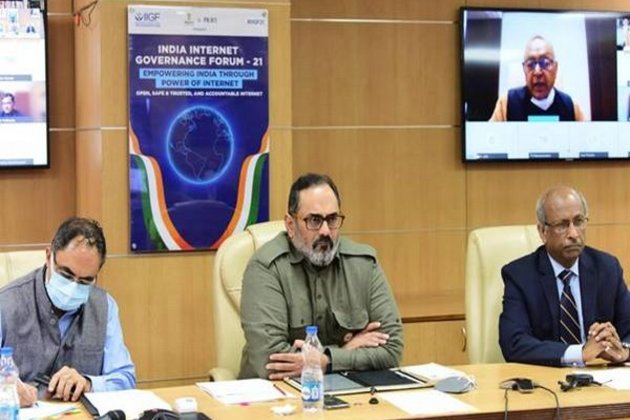 New Delhi [India], November 27 (ANI): The future of the internet must be shaped by open societies sharing the same set of democratic values and citizen rights said, the Minister of State for Ministry of Electronics and Information Technology (MeiTY) Rajeev Chandrasekhar on Saturday.

Highlighting "multistakeholderism" on the internet, Chandrasekhar said that there is a need to make the internet "open, safe and trusted and accountable for all under the Digital India Mission."The Minister was speaking during a high-level session on the final day of the India Internet Governance Forum (IIGF) - a 3-day online event on internet governance, jointly organized by the Ministry of Electronics and Information Technology (MeitY) and the National Internet Exchange of India (NIXI).

A report titled "Building an Inclusive Digital Society for Rural India" by ICRIER/BIF was also released during the event.

Speaking at the event, Rajeev Chandrasekhar said, "India is becoming one of the largest connected nations with 800 million people online and with the world's largest rural broadband program, we would soon have more than 1 billion Indians on the internet. In 2015, Prime Minister Narendra Modi launched the Digital India Mission with 3 major outcomes-- to transform the lives of Indians, expand economic opportunities with digital entrepreneurship and enhance strategic capabilities in certain technologies including the internet so that the future of the internet is shepherded by countries that are open societies and share the same set of democratic values and respect citizen rights.""India strictly supports multistake-holderism which is an article of faith for the PM Narendra Modi Government and the IIGF is all about bringing multi-stakeholders across the table for an open, safe and trusted and accountable internet," he said.

As per the release of the Ministry of Electronics and IT, the 3-day online event was centred around the theme "Empowering India through Power of Internet" and brought stakeholders of internet governance together to discuss the roadmap for digitization and reaffirm India as an essential participant globally.

The event that was held between November 25-27, also highlighted the role and importance of digitization in the international policy development on internet governance.