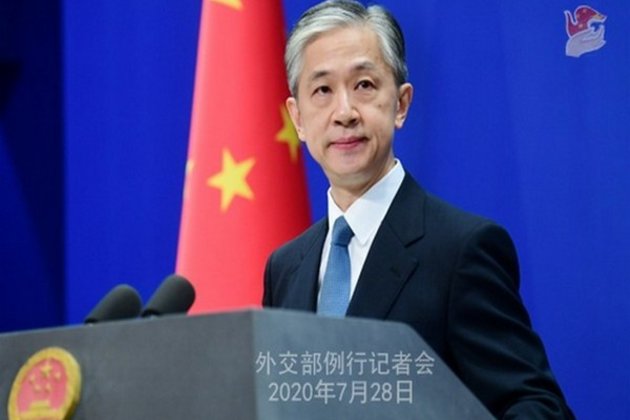 Beijing [China], November 29 (ANI): Issuing a warning to the countries to exercise caution in their statements and actions, China on Monday opposed any formal contacts between Taiwan and countries which maintain diplomatic relations with Beijing.

"China is strongly opposed to any official and political contacts between Taipei and countries that have diplomatic relations with Beijing. This position has always been clear and consistent," said Chinese Foreign Ministry spokesperson Wang Wenbin while commenting on the visit of members of Baltic parliaments to Taipei.

The spokesperson called on all countries concerned to "exercise caution in their statements and actions" and stop sending misleading signals to forces seeking Taiwanese independence, Xinhua news agency reported.

Earlier this year, China's ties with Lithuania went downhill after Lithuania allowed Taiwan to open a representative office in the country. Back in August, China had recalled its ambassador from Vilnius, to which Lithuania responded reciprocally on September 4.

On Monday, a joint delegation of lawmakers from Lithuania, Estonia and Latvia met with Taiwan President Tsai Ing-wen for the first time.

The delegation's visit comes as European countries have been strengthening ties with Taiwan in defiance of China's increased military pressure on the island. Europe is also demonstrating unease with Beijing's alleged human rights abuses in the northwestern Xinjiang region.

The meet would escalate tensions with Beijing following the opening of Taiwan's representative office in Lithuania, reported Kyodo News. In retaliation, China downgraded its diplomatic ties with Lithuania on Friday last week.

In order to counter China's surging influence, the lawmakers and Taiwan President agreed to advocate and endorse freedom and democracy. Tsai further mentioned during the meet that, Baltic nations and Taiwan have had related experiences in the past with regard to fighting against authoritarian rule and for freedom, reported Kyodo News.

Stressing that the Baltic nations and Taiwan ought to uphold free and democratic societies, Tsai said, "Now the world faces challenges posed by the expansion of authoritarianism and threat of disinformation."Matas Maldeikis, chairman of the Lithuanian parliamentarian group said, "Preserving freedom and rule-based international orders is vital interests for both Taiwan and Lithuania. We must strengthen our ties and work together for this aim."Baltic nations' and Taiwan's meet ignited China's hostile response. On Sunday, China sent 27 military planes into Taiwan's air defence identification zone, reported Kyodo News.

The Chinese Foreign Ministry on November 21 stated that Beijing's relations with Lithuania would be downgraded to the "charge d'affaires level," a rung below ambassador, adding that the country "grossly interferes in China's internal affairs," reported Kyodo News.

The delegates from the three Baltic nations would be attending a forum held by Taiwan's parliament on Thursday and Friday. (ANI)