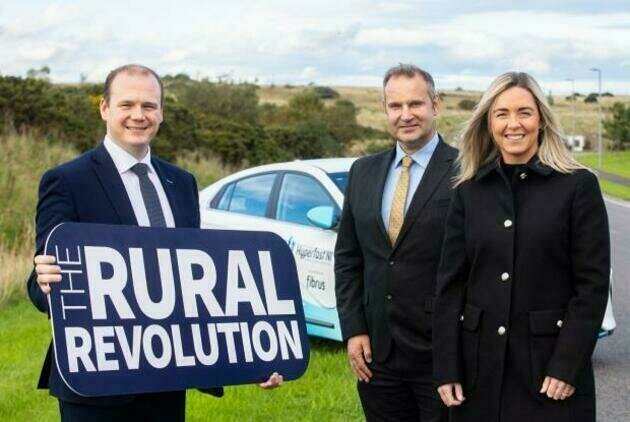 The Economy Minister today announced that over half of the 85,000 premises scheduled for improved broadband access under Project Stratum, in predominantly rural areas, can now connect to gigabit capable broadband.

Managed by the Department for the Economy (DFE) Project Stratum is the largest publicly funded telecommunications infrastructure project of its kind in Northern Ireland. It was developed to improve connectivity for premises unable to access broadband services of 30 Megabit per second (Mbps), primarily across rural areas of Northern Ireland.

Public funding totalling Pound 197m has been allocated to Project Stratum. Pound 150m of this funding was secured under the confidence and supply agreement between the DUP and the Conservatives following the 2017 general election. The Department for Digital, Culture, Media and Sport provided a further Pound 22m, with the Department of Agriculture, Environment and Rural Affairs providing Pound 20m, and DfE providing funding of Pound 5m.

After a competitive tendering process, the contract to make services available under Project Stratum was awarded to Fibrus Networks Ltd in November 2020. Fibrus Networks, a company that started out three years ago during the Covid-19 pandemic, has expanded rapidly during the roll-out of Project Stratum, and in support of its commercial investment plans, and now directly employs 320 people, with another 400 indirectly employed via build partner Viberoptix who subcontract a further 500.

Minister Lyons said: "Project Stratum is one of the most important major infrastructure projects that Northern Ireland has ever seen.  It has been made possible by funding provided through the DUP/Conservative Confidence and Supply agreement, and aims to make Northern Ireland one of the best connected countries in the world.

"The 85,000 premises set to benefit from this much-needed public intervention will help to close a broadband connectivity gap that has existed in Northern Ireland compared with other parts of the UK at superfast levels. Project Stratum aims to maximise coverage for as many eligible premises as possible across predominantly rural areas of Northern Ireland, and all premises to benefit will have access to full fibre, gigabit capable broadband."

The Minister added: "It is good news that Fibrus have passed over half of the scheduled premises and are already bringing huge benefits to many users, mainly in rural areas, as well as offering new employment opportunities for people here through Fibrus and their suppliers. It is encouraging to see that so many new jobs have been created by this broadband intervention scheme, which includes professionals working in the field and staff based at the contractor's Belfast facilities. I am also pleased that the social contract commitments under the Project Stratum contract have been exceeded, with Fibrus recording 2,939 New Entrant Training weeks, against a target of 2,640."

The rollout of Project Stratum is continuing, and Fibrus Networks are on-track to reach all 85,000 premises that form the contract by March 2025.